The 2018 Pulitzer prize for editorial cartooning was exceptionally given to the creators of a serialized comics story. Journalist and author Jake Halpern and artist and illustrator Michael Sloan received the prize for their narrative about two Syrian families who escape the civil  war to the US.

The 20-part comic “Welcome to the New World” was published in the New York Times during 2017. Unlike editorial cartoons in general, Halpern and Sloan’s comic does not aim to joke about a current issue and it does not have a satirical edge. 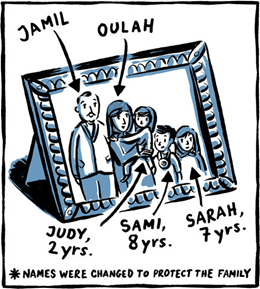 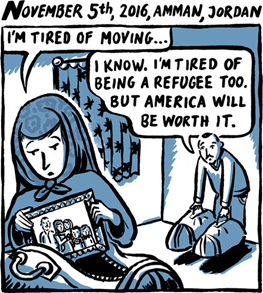 Nina Mickwitz, who has studied “documentary comics”, suggests that comics as a drawn medium have a particular problem with credibility. Drawn images are not considered believable, documentary or objective to the same extent as phtotographs. In addition, some comics readers may perceive comics as emphatically a medium for fictive, eg. exciting, funny or fantastic storytelling.

During the last few decades, however, genres of documentary comics such as auto-/biographies, travelogues, reportages and journalistic comics have become a central part of the contemporary comics culture. Consequently various conventions for making comics believably truthful and realistic have been established.

The paratexts of comics, or the various texts that frame the core text, in this case, “Welcome to the New World”, such as bibliographic information, forewords etc., are crucial for the understanding of documentary comics. An introductory text’s statement that the story is true is a strong encouragement to the reader to approach the text in a certain way. Believe what you are told! The events depicted really happened!

The central characters in “Welcome to the New World”, two brothers and their families who arrive from Syria via Jordan to the USA, are visualized in a rather plain style with only a few lines or brush strokes, but in a realistic fashion. Realism in comics indeed is fluid; there is no need for photorealism. As the previous Pulitzer-winner, Art Spiegelman’s comic Maus reminds us, even radical digressions from realism are possible without plausibility being at risk. Spiegelman’s comic about his parents’ experiences during the Holocaust is no less credible even though humans are depicted with animal heads.

It adds to the credibility of  the journalistic comic “Welcome to the New World” that the refuge story’s surroundings are familiar to the reader. The sparse narrative captions inform the reader about when and where events take place. In the depiction of the refugees’ flight it is, for example, significant when and along which paths it happens. ”November 5th, 2016, Amman, Jordan” provides the story with a starting point, that is both temporally and geographically familiar to most readers. The dialogue in the panel  shows that the family’s flight has started already earlier and that the travels and the story will take them to the US.

The connections between a documentary comic and an external reality are demonstrated by the inclusion of various documents in the comic. The trip made by Jamil and Oulah’s family from Amman via Cairo to New York is illustrated with a map. Despite of being sketchy and approximate in scale the map functions as a documentation of the trip.

The American states and points of time mentioned in the panel, however, do not inform of the family’s travels, but point at the Amercian context of their immigration. At the same time as the family arrives in the US, presidential elections are taking place. The markings on the map inform the reader about the opening times of local polls. 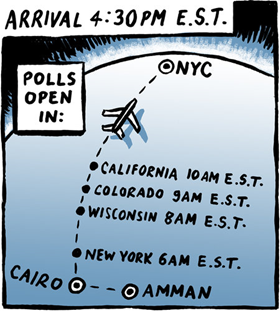 Maps are a common feature in comics about travel and migration. They obviously are an efficient way of presenting and documenting movement over long distances. Another common feature is photographs, either in their original form or as drawn images (our project member Aura Nikkilä’s doctoral thesis focuses on this narrative device in comics on migration). In “Welcome to the New World” photographs are presented as drawings. In the final installment (“The Keys to Our Home”), Jamil’s brother Ammar and his wife Raghida and son Nadir look at a video of their destroyed home in Homs, Syria, from the screen of a mobile phone. 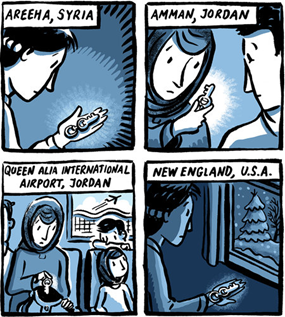 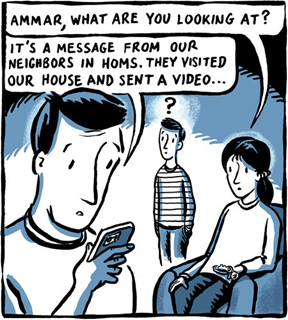 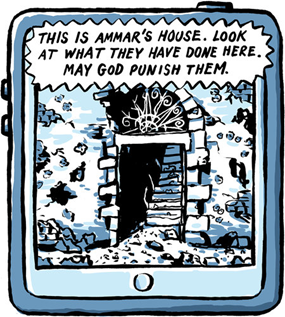 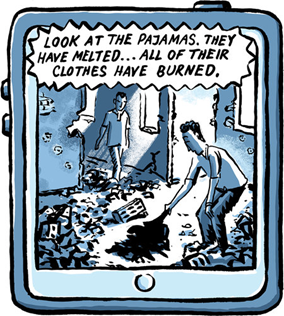 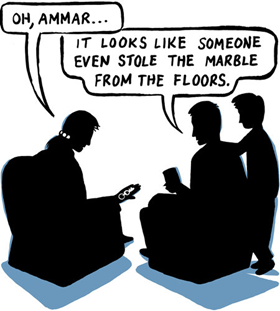 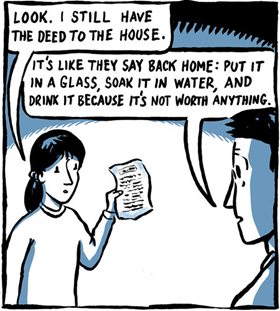 The photographs or, to be precise, the still images from the video function as documentary evidence. The slight change of drawing style (the images are more detailed and the drawn line is a bit thinner) and the panel frames provided by the phone suggest to the reader that these images are true. The fact that the reader is able to follow the family’s reactions to the images is significant for another reason. They provide the reader with an insight in the emotional and experiential effects of the images and consequently a possibility to identify with the family members.

The first image of the comic, the framed family portrait, similarly provides the reader with a familiar point of identification. The image introduces the central protagonists, but the generic composition and the posing make the image much more broadly recognizable than as one particular family’s portrait. The photograph is both a document depicting a specific family and a commonly recognized image of a family consisting of parents and children.

This email address is being protected from spambots. You need JavaScript enabled to view it.