When we speak about belonging to a particular place, the root is a strong metaphor. In the same way as roots attach a plant to the soil, humans are thought to grow a fixed connection to their place of residence.

The metaphor has its flip side. The rootless does not belong.

Sanna Hukkanen’s autobiographical comic book Juuri (The Root, 2015) tells about integration. The root functions both as thematic and as visual metaphor. An individual grows roots in her place of residence, there are roots between generations, and the family roots are intertwined with the roots of trees. 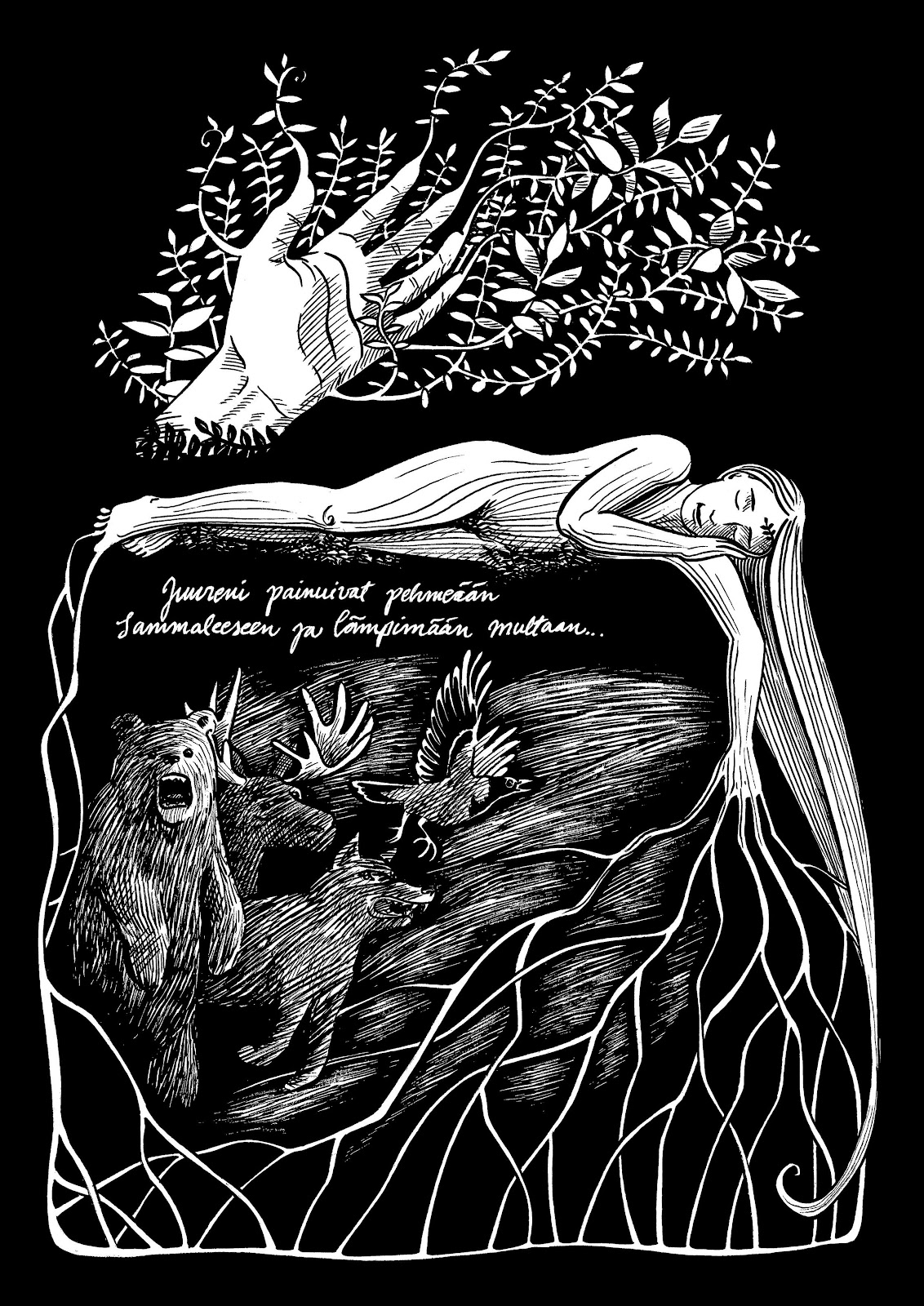 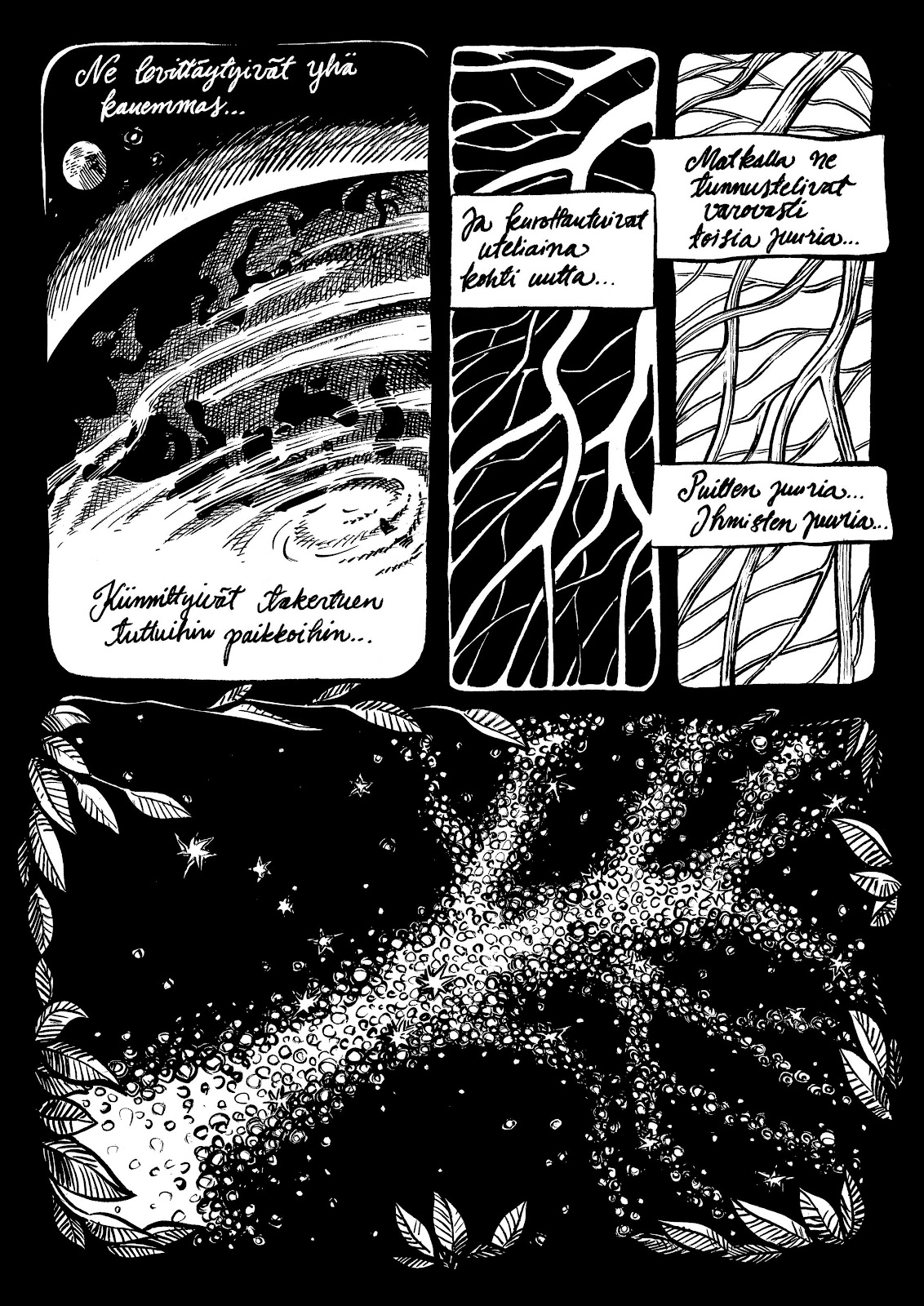 In the beginning of the album, the Finnish-Tanzanian couple has just moved to Finland and observes their new place of residence. The narrator character has the point-of-view of the homecomer but also reflects the reactions of her partner, the immigrant. The skier in the forest makes only the Tanzanian man laugh but the racist slogans shouted at him make them both equally puzzled: ”This reveals new sides of the supposedly silent Finns…”

The protagonist explores her family roots by interviewing her grandmother. In the end, the present circumstances are compared to the life in Tanzania: ”Well, it is kind of different”, acknowledges the granddaughter who has lived in Africa, ”but maybe not so different from the time of your adolescence in Finland…”

In one of the album’s stories, the couple is camping in the forest. At night, they resemble worms or seeds in their sleeping bags. In a dream, the characters in sleeping bags start to grow roots that stretch out and reach for something new and unseen, while at the same time probing other roots, of humans and of trees.

The last story of the album, ”Offspring”, focuses on the three-year-old daughter of the adult protagonists. The father is seen mainly at home while playing with Legos with his daughter. ”Unatengeneza nini?”, asks the father in Swahili and the daughter replies in Karelian dialect: ”I am building our home!” This bilingual scene depicts the daughter’s significance in the integration process of the protagonists: perhaps she could be interpreted as a root attaching both of them to Finland. In the panel, the daughter is surrounded by a vine that instead of growing into the soil spreads itself into the air. 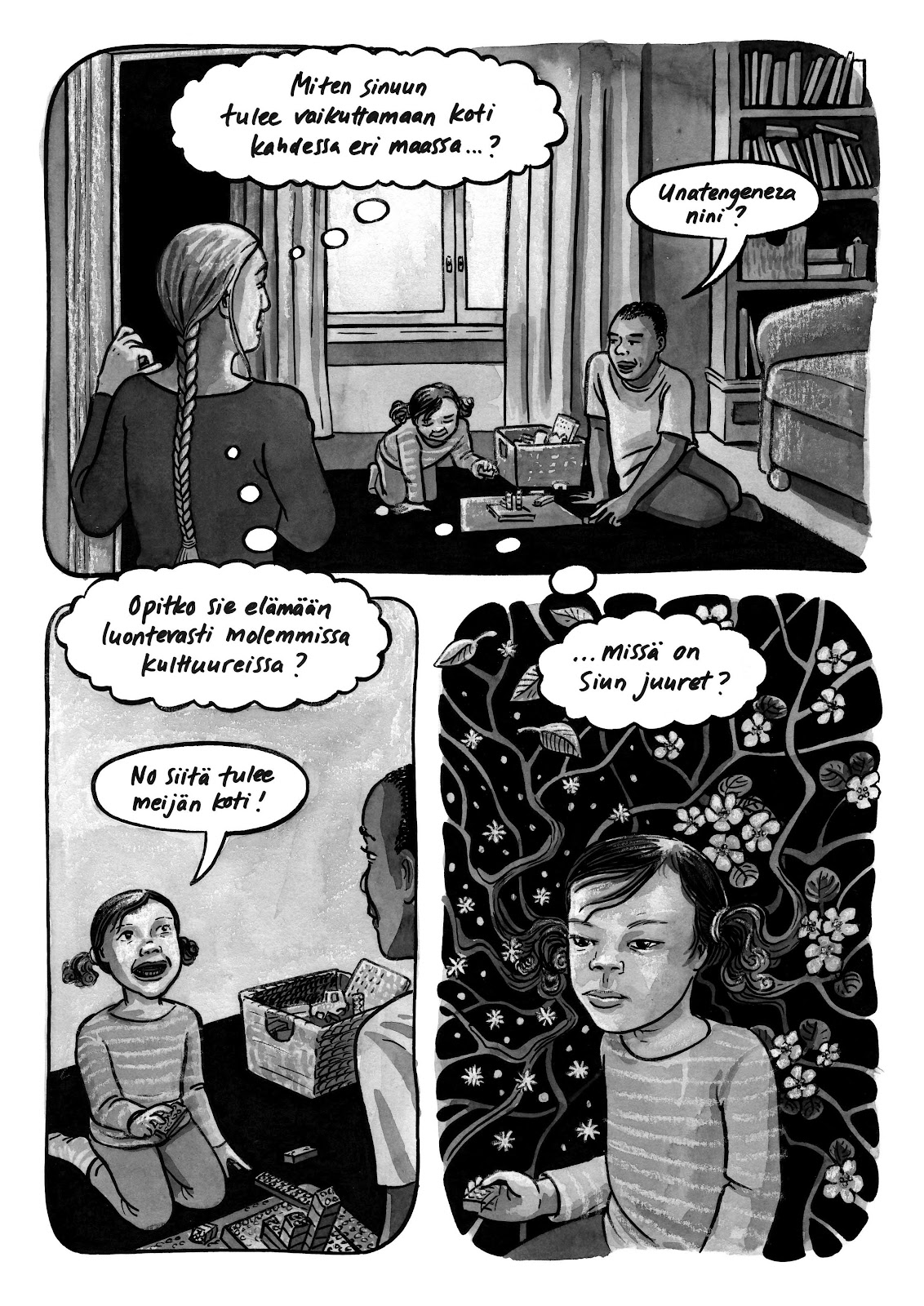 In the evening, the mother is reading a book to her daughter. Based on the citation, the book is (the Finnish translation of) Janosch’s Oh, wie schön ist Panama (The Trip to Panama). It is a story about a little tiger and a little bear who find a wooden banana box with the word “Panama” written on it. They start to dream about Panama and decide to go there. As they go around asking for the route from every creature they meet, they end up where they started, their home. However, they don’t realize the fact that they have actually returned home but continue to live under the impression that they have found the destination of their dreams, Panama. Finally, it is their own home that fulfils all their needs.

Janosch’s book is not only an intertextual reference but a mise en abyme or a mini-version of the story embedded inside the narrative whole. What happens to the tiger and the bear in Janosch’s book is analogical to the female protagonist’s experiences in Juuri. She also ends up in the place she has previously left, and she likewise doesn’t really recognize her place of origin. However, they find a home and grow their roots there.

Sanna Hukkanen’s Juuri shows that growing roots is a process, not something one is born with. With the help of different characters – a returnee, an immigrant and their daughter – the album demonstrates the ultimate social nature of integration. Nobody integrates alone.

This email address is being protected from spambots. You need JavaScript enabled to view it.